Punk Mama Ashley M. has just passed into her second trimester and has shared her first trimester diary with us!  We look forward to future installments from her as her pregnancy progresses and she meets her little one!

January 8th, 2017 – Here’s the thing, if you’re going to pee on a pregnancy test, you’ve really got to commit the next 5 minutes of your life to that stick.  I don’t think that most people would have this problem but to no surprise – I peed on the stick and then just forgot about it and got into the bath.  My husband came in to ask me about how it had gone and before he had finished his question, he saw the stick.  Just like that, positive, and he knew before me.

January 9th, 2017 – No matter how you’re feeling it’s best you call and schedule an appointment right away.  I am horrible at facing anything head on and this was no exception.  After about three hours I gathered up enough courage and called to schedule the appointment.  I cried a bunch because I was so nervous but also because this was probably the most important phone call I have made in my 28 years of life – at least that’s how it felt.  It’s better to bite the bullet than to have it just lingering around weighing heavy on your shoulders.  But, I couldn’t get to the doctors for two and a half weeks!  What the heck?!  How on earth was I supposed to survive the next two weeks?  I’ll tell you how, with about 30 pregnancy tests and a gallon of ice cream.  There isn’t much you can do, so even if it seems hard just try to push it to the back of your mind and distract yourself.  Take your vitamins, eat well, and rest rest rest.  All I want to do these days is sleep – I’m serious.  I have dreams about sleeping.  So, just take a deep breath and roll with it.

Today I decided which prenatal vitamins to buy, with the help of my friend, Google.  Oh, ye olde faithful Google – a double edged sword.  Take this, don’t eat that, you might be dying, that’s not normal, “statistics”.  It was there in the Target vitamin aisle that I had my first pregnancy break down.  I think this is normal and expected, and to be honest it helped relieve some of the pressure that I could feel building up.  I came to, gathered my vitamins, wiped my tears and continued in to the depths of my Target black hole.

January 27th, 2017: 6 weeks & 1 day – I was so emotional while scheduling my first appointment that I am lucky I was even able to take down the date let alone what was going to happen.  I showed up prepared to pee in yet another cup but that’s about it.  That was the easy part!  They asked questions about how I had been feeling, my family history, my medical history – just general stuff.  Morning sickness?  Nope!  None!  I’ve just felt tired but other than that, great!  (Boy, I am seriously regretting how amped up I was about that – I was pretty much asking for it.)  However, I was not prepared whatsoever about what happened next.  The nurse explained to me that I just needed to get an ultrasound done to make sure everything was where it was supposed to be and then I could be on my way.  Sure!  Easy peasy, lemon squeezy.  I walked into the room and the tech informed me that it was going to an internal exam.  WOOF.  When I say that I was not prepared, I mean it.  Ultrasound?  Isn’t that supposed to be OUTSIDE of the body?  I hadn’t taken a shower in at least a day and the last time I had done any grooming I got bored half way through and quit.  I was in no shape for a stranger to be poking around in my nether regions.  Here’s the deal, the instrument looks horrifying and you may not be groomed to your liking, but once you get past this and you see the heartbeat – it. is. WORTH IT.  My husband and I high fived and right there, in that moment (maybe only for that moment), I didn’t have any other cares in the world. 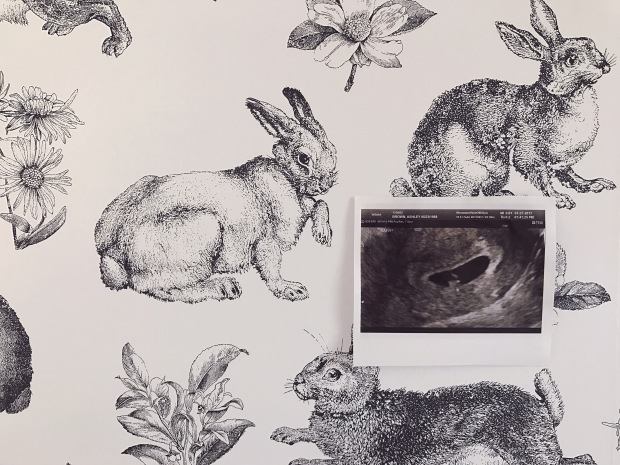 January 28th, 2017: 6 weeks & 2 days – …and then “morning” sickness hit except it wasn’t morning and I was asleep.  I shot out of bed at about 12:30 am and darted to the bathroom, barely making it.  Up came dinner, actually it seemed that everything I had ever eaten was coming up.  I felt better after about 45 minutes and I went back to sleep.  Since then, morning sickness rears its ugly head a few hours before bedtime, so when I start to feel it begin, I stop everything and just lay still in bed with no screens, not much sound, and just pet snuggles.  This seems to be helping but who knows what will happen tomorrow?

January 29th, 2017: …and everyday since… – Morning sickness is a strange beast – kind of like that John Green quote from The Fault in Our Stars?  “I fell in love (got sick) the way you fall asleep: slowly, and then all at once.”  I mean it was just slow building and then quick explosion – didn’t matter where I was.  In the shower, at Target, driving my car.  E. V. E. R. Y. W. H. E. R. E.  Morning sickness does not discriminate.  I suffer from chronic rhinitis which is hell, but apparently there is also pregnancy rhinitis that just amplifies chronic rhinitis so I spend a lot of time thinking about how I may just drown in my own mucus.  Great, just how I always wanted to go; put it on my tombstone: “Ashley Brown, death by snot.”  Oh, and I had a pretty serious reaction to lemonade – my throat got itchy, I swelled up, it was hell.  And everything these days tastes like metal – doesn’t matter what I eat or when I eat it, it just feels like I am just sucking on metal flavored cough drops constantly.

February 16th, 2017: 9 weeks – Second baby appointment!  I showered this time and did some grooming – didn’t shave my legs though so it wasn’t very well thought out.  This appointment lasted TWO HOURS AND THIRTY ONE MINUTES!  WHAT THE HECK?!  And I was alone because I thought it was going to be a quick in and out.  If I had a dollar for every time that I was wrong or regretted something during an appointment, I would have approximately ten dollars at this point.  I peed in a cup, they checked my sugars, we went through a detailed family history, the doctor filled me in on all of the great tests that I would have to have done and THEN she informed me that she needed to perform a PAP.  UGH THE WORST.  It passed quickly as she tried to talk to me about my job.  But I just cried.  Being a woman is great 98.1% of the time – I am going to say that 1.99% of the time that being a woman sucks (see previous sentences about being at the doctor’s office and getting an unexpected PAP while pregnant).  I reminded myself that this is her job, it’s normal to her, and there’s not much that she hasn’t seen – I am sure.

February 24th, 2017: 10 weeks & 1 day – “My first pregnancy meltdown, what a FUN TIME!” …said pretty much no one.  Steve took too long to help me out with something (he actually took about three seconds so I don’t know what happened here) and I took this as a sign that he hated me and didn’t want to have a baby.  I cried, I told him he was the WORST PERSON THAT I HAVE EVER MET and then I just got in the car and left him in Hanover, PA (about a half an hour away from home).  When I say that I cried, that’s putting it lightly – I cried, I screamed, I turned my phone off, and then got mad when I turned it back on two minutes later and there wasn’t a single missed message (HOW DARE HE!).  After about twenty minutes and a phone call that let me know he had a ride home, I calmed down.  I met him and his ride halfway to pick him up to head home.  And he had snacks for me.  Pregnancy hormones are no joke.  Disclaimer: My husband is a saint.

March 8th, 2017: 11 weeks & 6 days – One final first trimester to-do left!  Bloodwork – holy cow!  This lady took NINE TUBES OF BLOOD.  N. I. N. E.  You can’t drink during pregnancy but I’ll tell you what – getting nine tubes of blood drawn feels like drinking an entire box of wine.  Woof.  Glad that’s over with.  (Yes, I know that there will be more in the future, but shhh… we don’t need to think about that right now.)

The first trimester has come and gone; three months down and six to go.  Overall, it was by no means a walk in the park, but it wasn’t awful either.  If the remainder of my pregnancy goes this way, I won’t be mad, I’ll just continue to be shocked and surprised by my body and my doctor appointments.  I still don’t really feel pregnant, just oddly ill.  I look forward to the developing connection with my body, my baby, and the world outside. 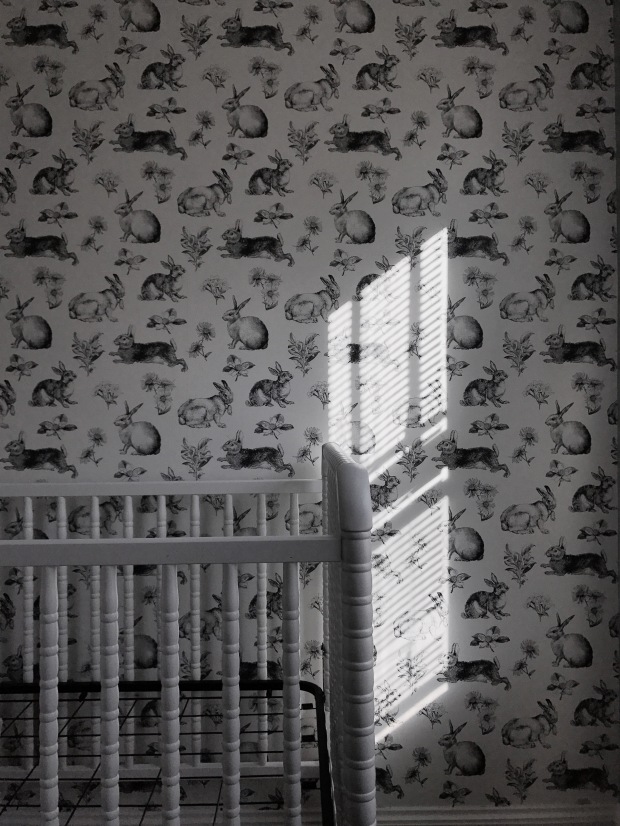